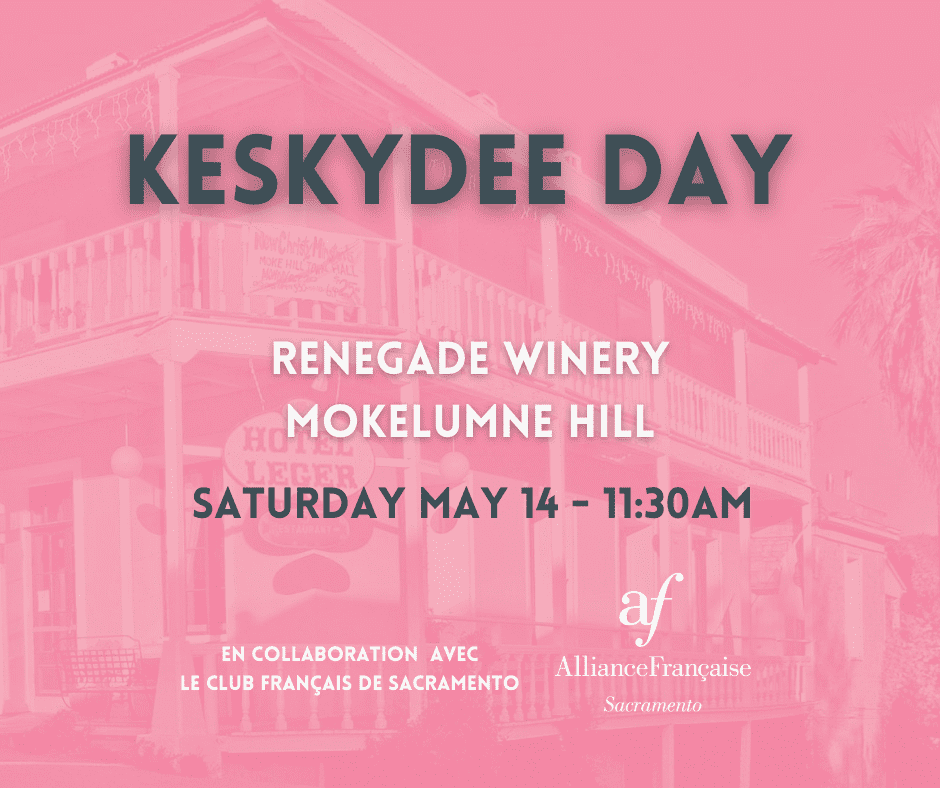 RSVP by May 6 at 9:00pm (RSVP deadline extended a few hours)


Join us for lunch and celebrate  Keskydee Day at Renegade Winery!

Relax in the historic town of Mokelumne Hill, enjoy a delicious home made meal, make new friends, and go home with unforgettable wine!

Bring your pétanque balls if you are interested in playing after lunch.

*Carpooling: If you'd like to attend, but need a ride, please email us at info@afsacramento.org and we'll see if we can match you with another attendee as we get closer to the event.

Why celebrate Keskydee in Mokelumne Hill?

A San Francisco French-language newspaper in 1853 estimated that some 32,000 French gold seekers were in California. French trappers are said to be the first European settlers along the Mokelumne River, and a French community was established in nearby Happy Valley by the 1830s.

With discovery of gold at Sutter’s Mill in 1848, the land was quickly overrun by prospectors. By 1850 the town was one of the largest in the area. Its population reached as high as 15,000 with people of all nationalities, particularly French, Germans, Chinese, Irish, Mexicans, Jews, and Chileans, besides American Yankees. In 1851 the French community counted about 600 to 800 French people.

Americans derided the French by calling them "Keskydees," derived from the Frenchmen's frequent and uncomprehending question,
"Qu'est-ce qu'il dit?" meaning, "What does he say?"

The French, like other foreigners, were subject to discrimination by United States citizens who wished to exclude miners from other lands. The Anglo-Americans tried to rid the state of foreign miners by requiring them to pay a special monthly tax of twenty dollars for the privilege of mining gold in California. The French, along with Mexicans and some Germans, mobilized opposition to the tax and staged an unarmed protest in the town of Sonora in 1850. Their protest came to be known as "The French Revolution."

Mokelumne Hill is registered as a California Historical Landmark, a beautiful town with many historical buildings.