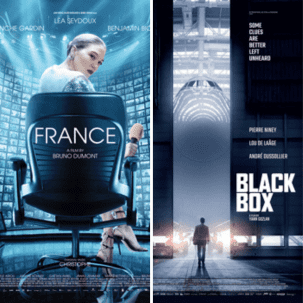 Our first rendez-vous of 2022 is with two films: a tragicomic satire of the news media and celebrity culture, starring Léa Seydoux, FRANCE by Bruno Dumont & a suspenseful corporate thriller unraveling a conspiracy behind a tragic plane accident, BLACK BOX by Yann Gozlan.
Both films are now available all over the U.S.
Your rental supports the Sacramento French Film Festival.
BON SPECTACLE !

Make sure to watch the films before
our Zoom Discussion with le Professeur Kevin Elstob,
on Friday, January 21 @6:30pm.
Click on the link to join the Zoom Discussion

Now for more about each film:

In this latest offering from Bruno Dumont (Slack Bay — SFFF 2017, and many other films other the years), Léa Seydoux (The French Dispatch, No Time to Die, Oh Mercy! — SFFF 2020) stars as France de Meurs, a seemingly unflappable star TV journalist. Her frantic high-profile world is suddenly turned upside down after a traffic accident in which she injures a delivery man. This unexpected irruption of reality triggers a series of self-reckonings. As France attempts to slow down and retreat into a simpler, anonymous life, her fame continues to pursue her. Also starring the irresistible stand-up comedian, Blanche Gardin (Delete History — SFFF 2021).
This tragicomic film starts as a satire of the contemporary news media before turning into something richer and darker, the tale of a possible redemption.
WATCH FRANCE HERE!

Following in the tradition of Antonioni’s Blowup or Coppola’s The Conversation, director Yann Gozlan and an excellent cast, led by the ever-impeccable Pierre Niney (Promise at Dawn — SFFF 2019), craft a taut, suspenseful thriller that unravels a conspiracy of silence in the French aeronautics industry.
Mathieu (Niney), a brilliant young black-box analyst with an extraordinarily acute ear, is charged with investigating a deadly and suspicious plane crash. When the case is closed by authorities, Mathieu cannot help but sense there is something wrong with the evidence. As he listens to the tracks again, he starts detecting some seriously disturbing details. Could the tape have been modified? Going against his boss’s orders, Mathieu begins his own rogue investigation — an obsessive and dangerous quest for truth that will quickly threaten far more than his career.... A fantastic thriller that will keep you to the edge of your seat!
WATCH BLACK BOX HERE!